The first Venezuelan Political Board Game

You are here:
News 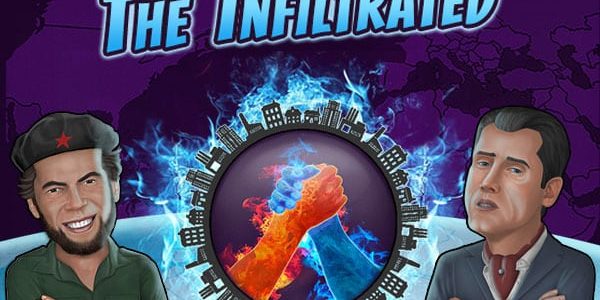 The first Venezuelan Political Board Game on Kickstarter

The Infiltrated, a fun card game that has just started his Crowdfunding campaign on Kickstarter

“The Infiltrated” is the first game of SBMjuegos, a society made up of three Venezuelans who have been working together for three years on this idea, and who face the adversities that the country goes through with a dreamy attitude and eager to ” Echar pa’ lante ” (never give up).

The project was born as a result of the reality that exists in Venezuela, where citizens have been divided into two sides with opposite political opinions, and the possibility of national reconciliation is becoming more and more diffuse.

The idea of ​​the game is to break the barriers that separate us and generate an environment of tolerance, friendship and above all, a lot of fun.

The Infiltrated is set in the political issue, in a troubled country where the protesting citizens have been infiltrated and will have to eliminate The Infiltrates to avoid more damage, but this will not be an easy task, since the Infiltrated has a group of accomplices who will play to keep their identity safe.

Up to 15 people can play in the same game. As the goal of the game is to foster mutual understanding and generate new friendships, it does not matter the political side of our preference, because we can play it in far left version, far right version or both.

There are two funny videos with the classic discourse of the world far right and far left that can not be missed:

An application for Smartphones complements the game, eliminating the need to read a manual, since the App guides players throughout the game.

What makes this game even more interesting and fun are its characters, in which we can find figures such as the Greedy (enchufado), the Profiteer (bachaquera), the Magallanes and Caracas baseball club fans, the Portu of the bakery, the Asian of the supermarket, and many others .

Robinson Ochoa Creative Director and Founder of SBM Juegos tells us:
“In SBMjuegos we are lovers of games and fun, our goal is to create cooperative games that do not generate rivalries but favor friendship and human connection.

The Infiltrated, is a game type party game, and the idea is that people have fun playing the political side of their choice.”

Jean Bermúdez Illustrator and Graphic Designer of SBMjuegos tells us:
“It was difficult to make the characters universal and completely ignore the reality we live in Venezuela. It is very funny to see the reaction of people who know our game when encountering native characters such as Profiteer, Greedy, Protester, or the Fanatics of the Magallanes and the Caracas baseball club.”

Do not miss this fun infomercial where you will see the most talked about world leaders of the year including President Nicolás Maduro:

The Infiltrated will be on Kickstarter from June 4 to August 3 of the year 2018.

In Kickstarter anyone can be a sponsor of The Infiltrated and receive in return a reward that goes from receiving a complete game and having access to the app, to become a game distributor and earn 50% on the investment amount.

You can purchase the game here: http://kck.st/2J6YgnY

Politics divides, but can a Political Game unite people?
14 June, 2018